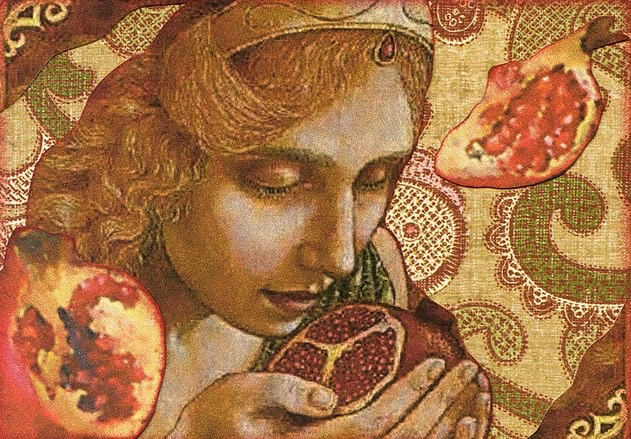 The Punica Granatum, commonly known as ‘the pomegranate’, comes with its own line of rich history and is truly one of the world’s most ancient of foods. The pomegranate is a superfood (rich in antioxidants) native to the East and can be found mentioned in historical documents as far back as 4000 BC.

The name comes from Medieval Latin and directly translated means ‘seeded apple’. It can be found named in a number of historical documents including the Torah, the Quran, and the Mesopotamian records.

Through archeological digs around the world, scientists have discovered carbonized remains of pomegranates in Jericho and Cyprus dating back to 3000 BC, and in Egyptian tombs including King Tut’s. Pomegranates were of a high value in ancient Egypt with pharaohs demanding a supply of the fruit be available in their residence. It was so loved that it was painted on walls and tombs to symbolize life after death.

Other artistic sightings throughout history include the pillars of Solomon’s temple in Jerusalem, on the robes of Jewish priests, and in mosaics in the ruined city of Pompeii. Used to depict a symbol of strength, the famed Persian army of Xerxes carried pomegranates on the tips of their spears when they invaded Greece in 480 BC.

Pomegranates can be found being used as devices of temptation in Greek mythology, a symbol of resurrection in Christianity, and as a symbol of prosperity and fertility in Hinduism.

When it was finally adopted by western civilization it was recognized then, as it is now, more for the natural medicinal properties and can be found on the heraldic crests of a number of medical institutions including the British Medical Association. As the super-fruit marched across Europe it was quickly adopted as a feature in many coats of arms often depicting the symbol of noble birth.

In the 1500s, Cortez conquered the Aztecs and planted pomegranate trees in Mexico. The planting continued north, thriving in California and Texas but failing in the northern regions where the temperatures proved too cold.

While remaining popular throughout the world it was around the year 2000 when pomegranates began to resurge in western culture as healthy eating began to grip a world filled with preservatives and super-sized meal options.

Across recorded history, our ancestors have held the pomegranate in high regard and the global love for pomegranates continues to grow and grow.